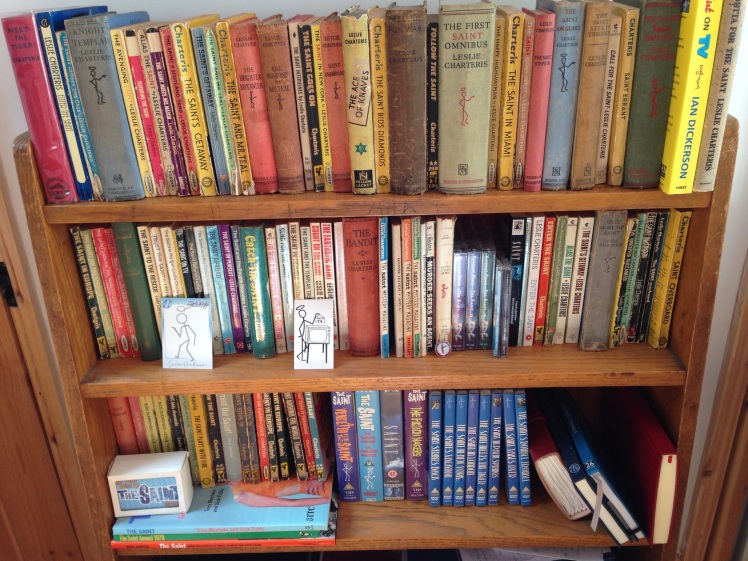 It started accidentally at a church or school jumble sale. I must have been about 13, maybe younger. Rummaging through the books I spotted a tatty paperback with the Saint stick man on the cover. When I was much younger I’d loved ‘The Return of the Saint’ TV show but only, to be honest, because of the animated titles featuring that Stick Man. I doubt I understood half of the action itself.

I bought that book for 5p. This is it: 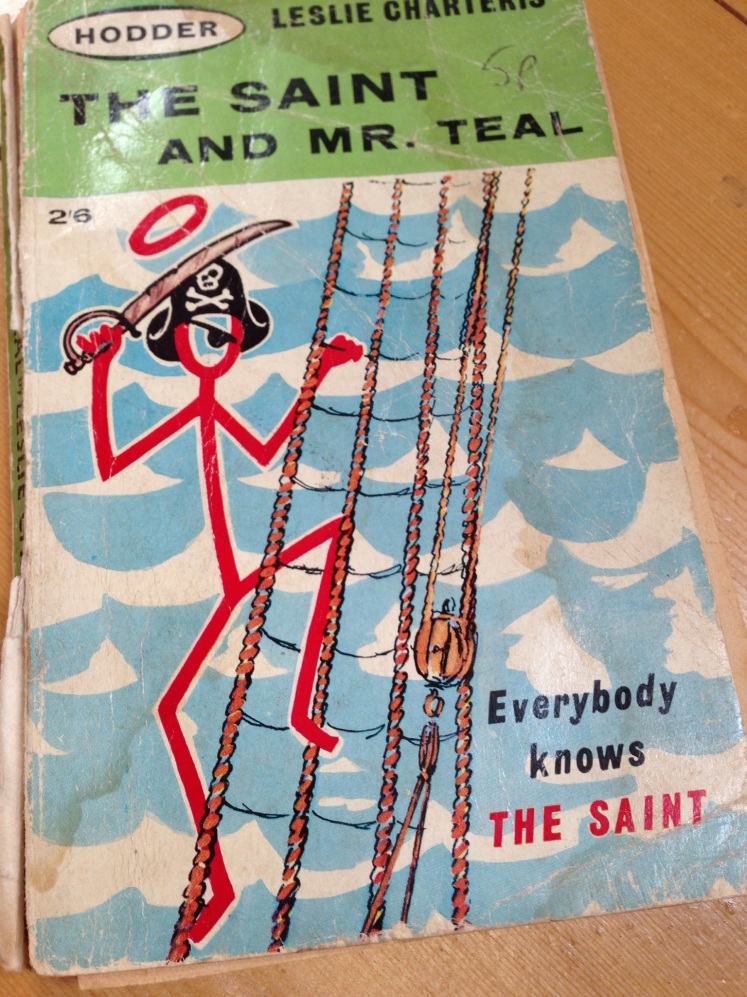 I was amazed by what I read: very funny and mischievous writing with a hard edge beneath the light surface. But OLD – this was the real surprise. According to the front page it had been published in 1933. This was the first indication I had that there was a Saint before Ian Ogilvy! And the first I’d heard of Leslie Charteris.

It was an entry into a new world of bootleggers and blackmailers, crooked businessmen and violent gangsters. It was a world of glamourous nightclubs, clever escapes, laughter, bravery and immaculate tailoring.

Almost as entertaining as the stories were the extras, all carefully designed to reward the fan: the amusing forewords, references to earlier adventures, louche dedications, and the final page advertising the Saint Club and promising a return for the Saint. 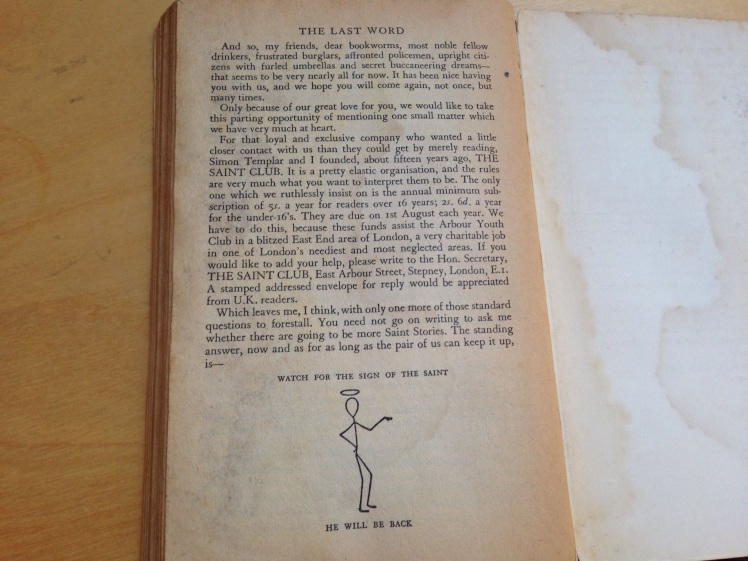 From then on I went to all the jumble sales I could find, looking for these books with their distinctive covers and wildly entertaining stories within. I  found them in charity shops and some high street shops still stocked a handful of titles republished in the 1980s. My grandparents also used to keep their eyes peeled at bring-and-buy sales. Later I discovered Hay-on-Wye and picked up many more titles, including, eventually and expensively, Charteris’ first published Saint novel, Meet The Tiger, absurdly difficult to track down and not very good even as pulp fiction.

I had of course along the way found out along the way that there had been rather a famous TV series in the 1960s and longed to watch the Roger Moore programmes. Naturally they were mostly a disappointment although there’s a certain innocent fun to them.

Then there was the series of films produced by RKO. As far as I’m concerned, George Sanders was the living embodiment of Simon Templar. The films bring to visual life too that era of champagne, diamonds, glamour and gangsterism simply by being made at that time.

It’s always been about the books for me though, which is why I haven’t collected all the Roger Moore DVDs. Having said that I’ve got some nice bits of  Saint-related memorabilia: a Stick Man badge produced for that ropey Val Kilmer remake, recordings of the Saint radio show with Vincent Price as Simon Templar, Saint magazines in English and French and some signed photos from the TV series that a good friend bought me for my 40th birthday as part of a fabulous package that also included autographs of Ian Ogilvy and one of the 30s movie Templars, Hugh Sinclair.

Why am I going on about this now? Just a couple of months ago, for my birthday, my wife bought me the last two that I didn’t own of the original 50 Saint titles which were either written by Leslie Charteris or overseen by him when he couldn’t be bothered to write them himself in later years.

For many years I’ve kept a list of the books I didn’t own in my wallet just in case I found myself in a second-hand bookshop. It’s still there, but now all the titles have been crossed off. I could go after first or rare editions but to be honest it’s never been the value that appealed to me, rather the fun, action and romance of the character and the stories. I may just read them all again!

Who’d have thought that that 5p purchase in a jumble sale all those years ago would have led to all this?