One of the few advantages of being ill for the last week was that it gave me chance to finish reading the books on this year’s  Dylan Thomas Prize long list. Here are my thoughts on numbers 7-10

7. ‘Tea at the Grand Tazi’ by Alexandra Singer

I felt it had an awkward rhythm, a confused plot, barely-drawn characters and was written in a style which veered between psychobabble and overblown cliché, as in this sentence:

He was only too aware of how fatally Maia was compelled by him.

She despised religion. To her, it was merely a social construction, the need of mankind to constantly prostrate himself before a higher being and to relinquish all individual control.

None of it made much sense to me, no episode ever felt complete and at the end of it I have no idea exactly what the crime at the centre of the story is. It tries to say important things about the empowerment of women yet gives us a central character who repeatedly allows herself to be subjugated.

All this makes it heavy-going as a reading experience, but there are flashes within which suggest that, with the right editor and a decent proofreader, Alexandra Singer has the potential to be better than this.

There are some very effective sequences in the Medina early on which give a good sense of the intimidating bustle of bazaars. And in these passages, you find some excellent turns of phrase such as the men ‘decaying in the smoke of their hazy enclaves’ and another man with

spread on the bed like lizards skewered by the men’s desire.

Alexandra Singer has an astonishing personal story which makes the fact that she completed this novel an achievement in itself. But judged by the incredibly high standards of most of the other entrants this was very disappointing.

In contrast this was simply stunning.

It tells the story of a boy and a girl from very different backgrounds who appear at first to have nothing in common. Over the course of the novel we find that that’s not the case and what’s more, that their destinies are set for them by the terrible things they do have in common. What makes them different to each other is not what they thought.

The girl is Abike, the daughter of one of Lagos’ richest men who also happens to have one of the murkiest reputations.  We never learn the boy’s name; he’s always referred to as ‘the Hawker’ or ‘Runner G’ after his job: he sells ice-cream to car drivers on a busy road but wasn’t born into poverty.

Their story emerges in alternating passages told from their different perspectives and the charm of their unlikely courtship in its early stages arises from their slightly differing accounts of each episode. The differences become more acute as the story progresses and their relationship becomes more fraught with dangers. By the time the thrilling and tragic climax comes, the alternating versions have shrunk to little more than sentences while their differences have stretched to form an unbridgeable gulf.

This is a novel about the difficulty of understanding another person and the difficulty of escaping the roles set out for you. It is beautifully, richly written in a clear English and a vivid Pidgin. Powerful, haunting and devastating.

Over the course of a New England wedding weekend, a wealthy WASP family struggles to contain a mass of repressions. These people are the modern equivalents of the buttoned-up aristocrats of previous generations: people for whom rules and roles matter, whether or not they’re adhered to or broken. 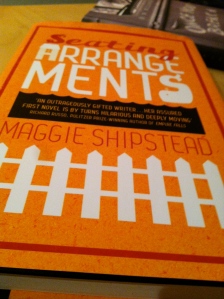 An extraordinarily accomplished novel, ‘Seating Arrangements’ tells of encounters and near-misses between the characters that disrupt a smooth and apparently privileged surface.

It most reminds me of ‘To the Lighthouse’ with its similarly claustrophobic setting in a second home at the sea. I’m sure it’s no coincidence that a lighthouse features in this novel; its searching beam strafing nighttime bedrooms.

It’s also like Virginia Woolf’s novel in the way the viewpoint shifts from character to character, building up a mosaic of internal monologues.  Motives are laid out more clearly than they are in Woolf’s writing, but Shipstead’s prose doesn’t suffer from mixing the explicit with the allusive. Here’s an example:

Sex appeal was something she rained down on the world indiscriminately, like a leaflet campaign.

There are some genuinely funny stretches too. Father and daughter meet up after she has been splattered with the blubber of  a beached whale which exploded. He, meanwhile, has been run over by a golf buggy:

“What in God’s name happened?”

“A whale exploded on me. What happened to you?”

And when the plot has been wound as tightly as a farce, there’s this:

Winn could not imagine being so happy, not in this kitchen full of women who had all fused together into one entity, one chattering hydra that he had married and fathered and fingered in the laundry room and kissed accidentally while playing sardines and paid to plan a wedding.

Winn is the Fisher King – he’s even wounded in the leg – vainly trying to hold his kingdom together. He’s deluded, full of hang-ups and trapped in the struggles in the past, still battling to remain part of an elite and not realising that the harder you try, the less that self-selecting elite respects you.

D.W. Wilson’s stories are about tough men and women living tough lives in a tough climate. They fight, literally and 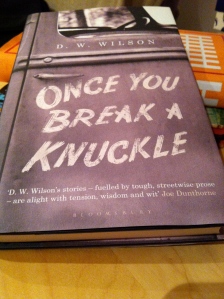 figuratively, each other and the difficult hands life deals them.

The stories set out where these hardened, self-reliant people meet their limits. Usually those limits are emotional: a lost father, a woman, a failed marriage, a failed job. A father and son show their love for each other in a life-long game of one-upmanship. A heart-broken builder returns to try to rebuild his life on a freezing construction site. A bookish young lad makes an unlikely friendship with a fearsome Jehovah’s Witness. A capable wife leaves her clever but impractical husband.

These are people who can fix things, but can’t fix themselves.

Wilson’s language is vigorous and literally muscular, all hardness and mechanics, but with an easy fluency and rhythm that never strikes a false note:

He eased himself from the Ranger, imagined his muscles unfolding like big ropes. Everything was the colour of ink. The sun teased behind the Rockies, gave tungsten outlines to their silhouettes.

He dug his gloves from the coat’s gut pocket and tossed them in the laundry sink. Splinters jutted from the palms, not deep enough to gouge his skin.

The sky had gone the colour of a rusty saw blade.

These are fine stories in themselves but they work together too. All are set in the unforgiving environment of small-town British Columbia, in fact in the same small town, Invemere. Add to that the fact that they share many of the same characters at different stages in their lives and the collection feels more like an impressionistic novel.

One thought on “Dylan Thomas Prize 4”