As you may remember from this post, I’m reading the ten books on the Dylan Thomas Prize long list. Here’s what I thought of numbers 2,3 and 4.

It would be too easy to say that I like this novel. I loved parts of it, hated others and was largely baffled throughout. The most accurate thing to say is that it felt as though I read it with my breath held. The artistry of it is breathtaking but so is the pain of the personal tragedy the book recreates. It hurts.

Built from short chapters retelling apparently disconnected episodes, the effect is disjointed, fragmented and weird. It’s about the ending of a relationship, the ending of relationships and how that colours everything that went before:

‘I guess endings don’t always follow the story,’ David said. ‘Some people don’t spend a day of their lives in a hospital until those last two weeks. Everything is different at the end in a way that hastens its coming.’

And everything IS different for David after his wife, Franny, is killed. He realises he doesn’t know much about large parts of her life, his own life and that of his family and friends.  Clearly already disturbed and mentally ill, after her death he descends into an insane grief which turns everyday life and encounters with other people into a hypnotic string of hallucinations.

A series of poetic threats written on scraps of paper begin turning up in the oddest places. Trying to piece them together and work out who sent them and why hastens his own derangement. A detective investigating what happens fails to piece anything together. It’s not at all clear what’s happening in David’s deluded mind and what’s real. Everything shifts from underneath us all the time.

Amelia Gray is a major talent. Her writing throughout is jaw-droppingly powerful and early on there is an astonishingly brilliant chapter which sets the tone of the whole novel and captures our sympathy for the – frankly very odd – David, a sympathy which keeps us rooting for him even as he gets madder.

What happens is that Gray swaps David’s perspective with that of the firefighter who finds him guarding his wife’s three-day old body:

David wasn’t sure how to tell her what needed to be said.

And the body-switch means it appears that David is comforting the firefighter, who is broken and grief-stricken. It’s amazing, hazy and heartbreaking.

I wonder if some of the other characters needed to be odd too. A therapist sets up office in David’s garage surrounded by swarms of wasps; a woman folds and refolds laundry. All that seems a bit too like David Lynch. But it’s a small quibble. ‘Threats’ is an overwhelming, painful, fractured and unforgettable experience.

3. ‘My Dearest Jonah’ by Matthew Crow 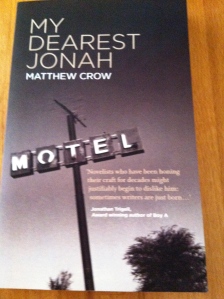 Much as I hate to say it, I simply couldn’t get on with this novel. I struggled to get to the end and disliked it throughout. I think it mistakes verbosity for virtuosity and felt throughout as if it were written in an impersonation of literary style. It takes the form of letters from two very lost souls in the Deep South of the USA. But they sound like each other, or rather like the author.  Bitterly disappointing.

4. ‘The White Shadow’ by Andrea Eames

Unless the next six books that I read are out-of-this-world, I think this should win the Dylan Thomas prize. It’s one of the most beautifully written, sad, magical yet clear-eyed novels I’ve read by any author for many years, let alone by one so young.

Set in a turbulent 1970s Rhodesia, the life that young Tinashe loves and believes secure is threatened at every turn: by poverty, by change, by jealousy and most of all by superstition and violence. Violence comes from within his family (his uncle), within his society (drunken thugs) and from without: dangerous animals such as leopards, the White rulers of Rhodesia and the rebels.

His strange and beautiful sister Hazvinei is the source of all his family’s problems. Not because she’s a witch as friends, relatives and enemies keep insisting to the family’s cost, but because she rejects the rules and traditions which bind them, just as her cousin Abel rejects his father’s authorities, just as the rebels reject white rule and just as Ian Smith’s government rejects British rule.

There are many layers of oppression here and that’s before you start on the spirits which wreathe their way throughout the story. They are as real as Tinashe and Hazvinei and others believe them to be. And they are as oppressive as any white policeman or pompous uncle.

The stories are multi-layered, the characters simply but deeply-drawn and the writing is luxuriant, rich in colours and smells and resonant with symbolism.

I felt the spirits closing in around the house. They were the black fur at the edge of my vision; the dank, musty scent that closed my throat and reached fat fingers down my nostrils, stifling my breath; the laughter in the night.

a cloying, green smell, like avocados rotting on the ground.

was not fat – she could never be fat – but she became ripe as a mango. She even smelled like a mango, fruity and exotic. How did even her smell take up more space?

the whispers of gossip reached long and splayed fingers into our house. I felt them run through my hair, investigating my ears, nostrils, mouth.

‘The White Shadow’ is about many things: loss of innocence, love for your family, loss, fear, superstition, hypocrisy, the hardship of village life, the hypocrisy of town life. It’s about the way women are forced into roles: wife, mother or witch. It’s about the painful transition of a colony into a nation.

But above all it’s about the wide-eyed innocent at the centre of hostile forces beyond his control, whose love and loyalty isn’t enough.

It’s about one of the most likeable, admirable, pitiable heroes of any novel: Tinashe who somehow survives the loss of everything.