This also first appeared on Wales Arts Review. There are plenty more reviews and long essays on art and literature to be had there. 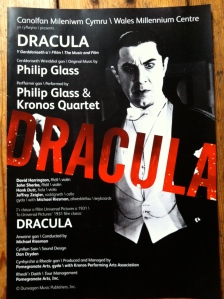 I don’t know much about classical music but I love listening to live music of any kind and I love the old Bela Lugosi Dracula film with all its creaking campness that made this Philip Glass live soundtrack concert an enticing prospect. Was it a concert? Was it a film with music? Once upon a time all films were accompanied by live music whether or not it was the tinkling pianos we now associate with Chaplin or Keaton or bigger, orchestral affairs.

This twenty-first century version of an old-fashioned experience saw the Wales Millennium Centre’s main theatre – surely one of the best concert theatres in the UK -transformed for the night into a picture palace. Beneath a large, white cinema screen (incidentally built to fit the original aspect ratio of the film) sat six men: the Kronos Quartet, keyboardist/conductor Michael Riesman and the man himself, Philip Glass, all curls and concentration as he painted sonic soundscapes for Transylvanian mountains, crumbling castles, London drawing rooms and the sinister Carfax Abbey.

Glass may be known as a master of minimalism, but this was no minimalist music: it surged and soared, rolled and roared, filling every gap left by Tod Browning’s 1931 film. And there are plenty of crevices: there’s no music in the original movie, very little natural sound and not a great deal of dialogue.

And let’s be honest, Dracula is a hard watch these days. Mannered, stagey acting; those ridiculous close-ups of Lugosi’s eyes and the fact that all the action takes place off-camera with long, expository stretches of dialogue to bring us up to speed. Not that you could hear much of the dialogue: much of it was muffled or simply drowned out by the music. In fact the Cardiff audience reacted to the film as if it were a comedy. Every slow, sinister speech of Lugosi’s, every manic grim by Dracula’s harbinger Renfield and every appearance of the rubber bats was greeted by gales of laughter.

We watch dated films in an ironic way these days. But the soundtrack Glass has given Dracula isn’t ironic and, like the Count himself, he’s bestowed a strange kind of afterlife.